Abbreviated as AUS by abbreviationfinder.org, Austria is an industrialized country, and a large part of the population work in industry and service professions. Tourism is an important industry, which contributes greatly to reducing the current account deficit abroad. The country has seen strong and steady growth in gross domestic product (GDP) since 1965: an average of 3.5% per annum in the period 1965–85, 2.3% annually in 1985–94 and 1.7% annually in the period 1995–2004. In 2004, the primary sector (agriculture and forestry, fishing) contributed 1.5% of GDP and employed 4.3% of the working population. The secondary sector (industry, mining) accounted for 30.5% and 23.4% respectively, and service industries 68% and 72.3% respectively. 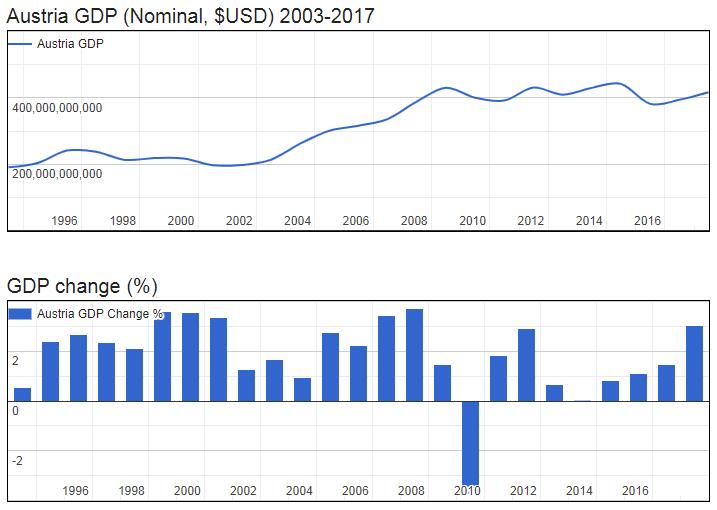 Nearly 43% of the land is agricultural land. Most of this (24%) is natural meadow and pasture, only about 18% is fully grown. In the lowlands much wheat, sugar beet, corn, barley and potatoes are grown; barley can be grown up to 1500 m. In Lower Austria (Wachau) and Burgenland a lot of fruit and grapes are grown, a total of approx. 50,000 ha are planted with vines. Until 2009, wine production was approx. 2.5 mill. Hl annually, mostly white wine, but wine share has increased greatly, from 1/5 in 1990 to 1/3in 2004. In 2010, total wine production fell sharply, ending at just 1.7 million hl. Animal husbandry dominates the valley and mountain areas; however, cattle and pig teams are common everywhere. Wheat, barley, maize and sugar beets dominate the field. Austria has a high in-house production of very many foods, and exports both meat and dairy products. Organic farming stands strong; in 2004, approx. 10% of farms run on ecological principles.

With approx. 40% of the land covered by forest, Austria is the most wooded country in Central Europe. 3 / 4 coniferous, especially spruce. Good forest management has led to increasing production. Annual felling 1960–90: 10–13 million m 3, in 2003 and 2004 16–17 million m 3. About half goes to sawn timber, the rest to industrial timber and fuel. The country has several thousand sawmill and wood processing companies. Almost half of the timber is exported, primarily to Italy. Cellulose and paper are also important export goods.

Iron ore has been mined in Austria since Celtic times; the majority of the ore is mined at Eisenerz in Styria, where an annual 2 million tonnes are mined. The mining of lignite is today negligible, after production at the last large field (Köflach, near Graz) was stopped in 2003. Large quantities of magnesite (1 million tonnes) are mined in Hochfilzen (Tirol) and Styria, while Mühldorf (Lower Austria)) has among the world’s largest deposits of high-grade graphite. In addition, there are copper, zinc and tungsten; rock salt is mined in the Salzkammergut, while Carinthia has potassium salts. From petroleum fields in Matzen northeast of Vienna, approx. 1 million tonnes of crude oil per year (2004). This covers 8% of Austria’s oil consumption. Gas comes mainly from Marchfeld east of Vienna, which provides the country with 20-25% of what is needed. The majority of oil and gas consumption is covered by imports; there are oil pipes from Trieste to Schwechat near Vienna and gas pipelines from Russia. 11% of gas imports come from Norway.

Well 1/5of the employed are employed in the industry, which spans a wide range of production. Heavy industry is heavily developed around the iron ore clay in Styria, with the iron and metal industry and integrated iron and steel plants, among others. in Judenburg, Donawitz and Kapfenberg. It produces approx. 7 million tonnes of steel (2005); aluminum is manufactured in Arnoldstein (Carinthia). In Brixlegg (Tirol) there are large plants for the recycling of metals. Graz has significant engineering industry with the production of industrial machines, mopeds and optical instruments. Steyr, south of Linz, is the center for the production of motor vehicles and tractors. Linz has large iron and steel plants, chemical industry (nitrogen fertilizer), electrical and electronic industry. The textile and clothing industry is important in Vorarlberg; Vienna is center for haute couture and luxury goods, graphic industry and publishing. Large parts of the industry, which were formerly in state hands, have been privatized since 1990 and have been partly bought by foreign investors, including the three largest companies in Austria: the OMV oil company, the Steyr-Daimler-Puch automotive plant and the metallurgy company VOEST- Alpine.

Hydropower is well developed and accounts for approximately 60 percent of electricity production (40.4 TWh in 2017). Thermal power generation is around 30 per cent, of which 15 percent is produced in gas power plants and 7 percent in heat power plants based on renewable energy (biomass). After the turn of the century, an expansion of wind power was initiated, which in 2017 contributed 5.6 TWh (8.7 percent). In 2017, 77 percent of the power was produced with renewable energy.

The nuclear power plant in Zwentendorf near Vienna was completed in 1979, but was never put into use because 50.5 percent of voters said no to nuclear power in a referendum that year. In total, it had then cost 14 billion schillings (= 1 billion euros). The facility is currently used for other purposes, including as a training center for operating personnel working in other nuclear power plants.

Tourism is an important industry; the country had 19.9 million foreign visitors in 2005. After the introduction of the euro as a currency unit, it is difficult to calculate the revenue, because exchange of money is out of the question for most, but the foreign tourists contribute an estimated 6% of GDP. The country’s tourist attractions include: winter resorts in the Alps, rich cultural offerings in Vienna and Salzburg, and picturesque wine villages along the Danube.

The majority (10.3 million or 52%) come from Germany, while others come from the Netherlands, Italy, Switzerland and the United Kingdom.

There is a well-developed road network, with over 100,000 km of public road, of which 12 000 km are main roads. There are over 2000 km of motorway, which connects most parts of the country with each other and which serves to wind up the huge transit traffic. Germany – Italy over the Innsbruck – Brenner Pass, Germany – Slovenia over Salzburg – Villach and over Passau – Graz. From Vienna, the motorway goes east to Budapest and south to Graz and on to Trieste. The east-west highway from Vienna to Vorarlberg runs approx. 90 km through Germany. The highways are subject to a fee, payable for a vignette that gives free access everywhere. Driving lights have been mandatory since 2005. The country has a high car density with around 4.1 million passenger cars (1 per 2 cars).

There are a total of 6024 km of railway connecting the whole country, and there are lines to all neighboring countries. 3641 km is electrified (2002); 90% is state owned. 200 million passengers and well over 90 million tonnes of goods (2004) are transported by rail annually; the strongest traffic routes are the Vienna-Trieste (free port of Austria), Vienna-Munich and Innsbruck-Brenner.

The Danube is Austria’s only navigable river for shipping traffic (351 km long in Austria), and barge traffic here plays a significant role in the transport of iron ore, coal and coke (total freight volume 2002: 10.7 million tonnes). Tourist ships on the largest lakes and the Danube.