According to COUNTRYAAH, Congo has huge assets of minerals, diamonds, forests and water as well as good conditions for agriculture, but due to political chaos, poor infrastructure and great dependence on the world market price of a few dominant export products, the country’s economy is falling apart. From 1967-74, Congo had an average GDP growth of about 7 percent, but from the mid-1970s to the beginning of the 1990s, the economy deteriorated dramatically. President Mobutu Sese Seko’s economic and political program in the early 1970s, when many industrial and agricultural companies were expropriated, was one of the main reasons for this. The 1980s meant some financial stabilization, thanks in large part to large foreign loans and international aid, but after 1991 the recovery was transformed into a deep economic crisis. Between 1985 and 2000, average inflation was approximately 400 percent per year (in 1994, an inflation peak of 24,000 percent was reached). During the opening year of the 2000s, inflation was down 4–10 percent, but since 2005 it is again around 20 percent. The periods of high inflation have led to US dollars being the most viable currency in the country. In recent years, average growth has been close to 6 percent. 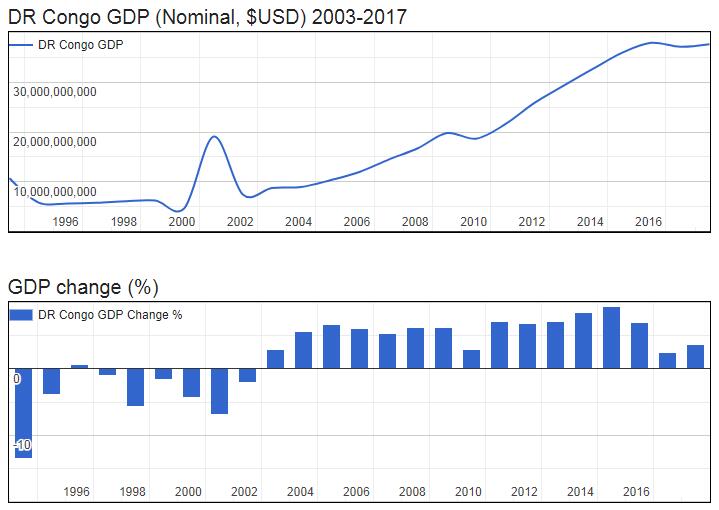 As a result of the chaotic economic situation in the country, the informal sector has grown and is estimated to be three times the size of the official gross domestic product.

Although Congo has good natural conditions for agriculture, the cultivated area in the country is only 4 percent. Agricultural production is much hampered by the country’s major infrastructural shortcomings. Large parts of the agricultural areas are not transported sufficiently to the markets in the large population concentrations or to the international market. Lack of transport opportunities, for example, means that the people of Kinshasa cannot be reached by agricultural products from areas outside the neighboring provinces, which periodically presents major supply problems for the capital.

Mining has been the cornerstone of the country’s economy since colonial times. The African copper belt from Zambia in southern to southeastern Congo is estimated to be the world’s largest aggregate copper deposit. The country’s political situation, strikes and technical problems have meant that the state mining company GÉCAMINES, which in the 1980s accounted for 90 percent of copper production, has reduced its production. Similarly, Congo’s cobalt production has declined sharply; the country previously accounted for about 65 percent of world production. Congo is also a major producer of industrial diamonds. In addition to copper, cobalt and diamonds, tin, zinc, gold, manganese, silver, platinum, tungsten and uranium are also mined. Mining production is concentrated in the eastern and southern parts of the country. Copper, cobalt and zinc are mainly mined in the provinces of Lualaba and Haut-Katanga in southeastern Congo, while diamonds are found around the cities of Mbuji-Mayi and Tshikapa in central Congo. A large part of the other mining industry is concentrated in the eastern parts of the country. When state control collapsed, the breach occurred in a primitive and more or less illegal way, with life-threatening working conditions as a result. Corruption and smuggling are other problems in the industry.

Abbreviated as DRC by abbreviationfinder.org, Congo has great potential for energy production, mainly through the Congo River’s water resources and oil deposits off the coast of the country. Most of the electricity needs of industry and major cities are covered by water energy, mainly from the Ingak power plant in the Congo River, while the rural needs are met by motor-driven electricity generators. The oil off the coastal strip is largely exported as crude oil as the domestic refineries do not have the capacity to process it.

Nearly 80 percent of the country’s area is covered by forests, and the country’s forest assets make up nearly half of all of Africa’s. Despite this, a very small part is used and mainly for fuel. The country’s own processing industry is very small, and most of the timber production is exported.

In the 1960s and 1970s, Congo had a relatively well-developed processing industry for beer, cement, cigarettes, soap, sugar and textiles. As a result of the country’s economic and political crisis, the industrial sector was halved in the 1980s. The decline continued during the 1990s, when certain industries, such as the cement industry, experienced a significant decline. Lack of foreign capital for spare parts purchases, decline in the domestic market and serious disruptions in electricity supply to the factories are some of the reasons for the decline.

The most significant industrial plants were the smelters in Lubumbashi, Kolwezi and Likas, as well as the chemical industry that has grown in connection with these. Thanks to major reconstruction projects, the construction industry is the fastest growing industry branch. The textile and food industries, which mainly produce for the domestic market, are located mainly in the metropolitan area.

Congo has long had a surplus in the trade balance, but imports have increased as the country stabilized, and the trade balance now shows a rather sharp deficit. However, as a result of a very extensive smuggling of minerals and agricultural products, trade statistics are very uncertain. Exports are highly commodity-dominated. The mining industry accounts for about 90 percent of the export value; industrial diamond production alone accounts for about 50 percent. Gold, copper and cobalt are also important export goods. Of agricultural products, coffee is the only commodity that has any major significance for exports.

The main exporting countries are China, Zambia and South Korea, while imports are mainly from China, South Africa and Zambia. 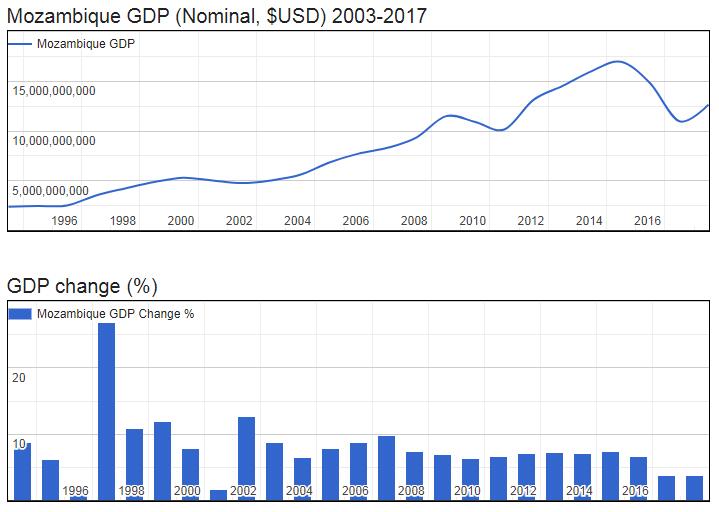