The economic development in Libya is strongly influenced by the effects of the 2011 war. It caused material destruction, especially on the country’s infrastructure, but most of all, to the point that central, state functions ceased to exist. In addition, the war and regime change resulted in a persistent absence of security and stability, which are prerequisites for planned economic activity and a functional business sector. Since 2011, the country has been the scene of a power struggle between various groups, with rival governments in Tripoli in the west and Benghazi in the east.

According to COUNTRYAAH, Libya’s economy is strongly linked to the extraction of oil, which in the second half of the last century transformed Libyan society completely. Before oil recovery began in the late 1950s, Libya was one of the world’s least developed countries, and then to the highest standard of living in Africa. Political prioritization of the education and health sector following the military coup in 1969 contributed to the development, which included significant industrialization based on petroleum activities. At the same time, strong urbanization took place.

Muammar al-Gaddafi implemented extensive modernization, but also pursued an unpredictable policy, which partly promoted and partly hampered economic development. Among other things, his radical and anti-imperialist policies, including support for terrorism, led to conflicts with several Western countries. The United States, as well as the EU and the UN, imposed sanctions on Libya in the 1980s, some of which were not repealed until 2004. The sanctions prevented a long-awaited modernization of the oil industry and led to a lack of capital, which made it difficult to finance development measures. In addition to the sanctions, the fall in oil prices from the mid-1980s led to virtually all development projects being put on ice.

The destabilization of Libya as a result of the 2011 war has led to sharply reduced state revenues, primarily due to reduced oil recovery, in part because much of this occurs in the eastern part of the country, which the Tripoli government lost politically and military control over.

A consequence of the political situation is also that economic, and other statistics, are deficient. Prior to the war, Libya had strong economic growth (an estimated 10.6 percent increase in gross domestic product in 2010). The war led to a sharp decline in 2011 (estimated at minus 62.1 per cent), ahead of a strong upswing in 2012 (104.5 percent). Subsequently, the subsequent civil war has again led to a stagnant economy.

Abbreviated as LBY by abbreviationfinder.org, Libya until the oil recovery began in the 1950s, and capped in 1969, a traditionally bound agricultural community. In Roman times, Libya was a grain chamber. Under Italian colonial rule in the first half of the 20th century, immigration from Italy took place, with investment in agriculture. After World War II, Libya became an independent monarchy, but King Idris contributed little to modernization.

Following the 1969 military coup and the subsequent revolution led by Muammar al-Gaddafi, Libya pursued a socialist- oriented policy, with strong state participation also in economic life, and limited opportunity for private business. The vital oil industry was nationalized in 1970. Throughout the 1990s, economic liberalization took place, which opened up for private ownership, also through the privatization of state property. In the first half of the 2000s, relations with Western countries, including the United States, Italy and France, improved, with increased foreign participation in the Libyan economy as a result.

The Norwegian oil company Saga Petroleum received licenses in the Libyan oil sector in the 1990s (later acquired by Norsk Hydro, then Statoil), and in 2009 the fertilizer company Yara bought into a Libyan mineral fertilizer plant.

The petroleum sector has been completely dominant in the Libyan economy for more than half a century. It has traditionally accounted for around 95 percent of Libya’s export revenue, but was somewhat lower before the war. The sector accounts for between 50 and 60 percent of the country’s GDP.

After the war in 2011, oil production has varied greatly, influenced by the security situation. For example, oil recovery went from around 500,000 barrels per day in June 2018 to 1.3 million barrels in November of that year. Parts of the Libyan oil reserves and recovery are located in areas east and south of the country, which are controlled by militia groups. This also applies to the Sirtegulfen, which is the core area for oil extraction and export. Several oil companies are active in Libya, but the state-owned National Oil Corporation (NOC) is the dominant player.

Libya has the largest known oil deposits in Africa, and the 9th largest in the world; in 2017, an estimated 48.4 billion barrels. Libya also has the world’s 22nd largest natural gas presence, with 1500 billion cubic meters in proven reserves (OPEC).

The first major discoveries of oil in Libya were made in 1956, and then exports started in 1961. With the closure of the Suez Canal in 1967, the country’s oil became attractive through lower transport costs than from the Gulf, which is still an advantage. At the same time, Libya’s oil is affordable to produce and of good quality, which has made the country’s deposits attractive to both production companies and importers.

After the major oil fields, especially at Amal and Zelten, were found from 1959, production and exports increased rapidly. Prior to the 1969 revolution, Libya was the world’s fourth largest exporter of crude oil. The policy that was then pursued, with nationalizations in 1970, led to a decline in investment and gradually in production. From a daily production of 3.3 million barrels at most (1970), it was reduced to 1.5 million barrels in 1975.

Around 90 percent of the oil is sold to European countries, most to Italy, Germany and Spain. Gas is exported to Italy: A subsea pipeline to Sicily was opened in 2004 as a gateway to the European market. Libya was one of the first countries in the world to start liquefied natural gas (LNG) exports in 1971. The plant for LNG production was destroyed during the war in 2011, and exports ceased.

Libya has few known viable deposits of other minerals. Commercial extraction of iron ore in the south of the country, estimated at 700 million tonnes, requires the construction of a capital-intensive, 900-kilometer long railway to the coast.

The electricity supply infrastructure was hit hard by the war in 2011. Both power plants and parts of the electricity grid were destroyed. Available production capacity was 4.9 GW in 2017, while demand is estimated at 6.5 GW.

In 2016, the consumption of electrical energy was 29.5 TWh. Around 49 percent of the power is produced in combined power plants, while gas turbine plants account for 40 per cent. 11 percent comes from ordinary thermal power plants, which use oil as fuel.

Until oil recovery became the dominant economic sector from around 1960, agriculture was the basis of the Libyan economy. As late as 1970, nearly half of the working population in this sector worked, many as nomads. At the end of the millennium, the proportion had dropped to about 15 percent.

Most of the land area is desert, and the remainder can only be used for grazing. Only about 1.4 percent is cultivable, and about one percent is cultivated. Of this, about a tenth becomes the artificial water. The authorities gave high priority to agriculture before the war, and a number of irrigation projects were initiated. The largest of these was aimed at pumping six million cubic meters of water per day from sub-Saharan wells to the coastal agricultural areas, through a 2000 km long pipeline network, in a project that has not been completed.

Animal husbandry is still an important source of income for many farmers, especially in Kyrenaika. Sheep, goats, camels and cattle, as well as horses, donkeys and mules – are kept especially for the production of milk and meat, as well as for transport. The dominant crops in agriculture are wheat and barley, but olives, peanuts, citrus fruits, almonds, potatoes and vegetables are also produced, which are mostly grown in the coastal oases. Dates are grown in the coastal oases and in Fezzan; tobacco in Tripolitania.

There are significant offshore fisheries, but the fishing is mainly operated by Greek, Maltese and Italian boats, under license and for export.

Libya depends on importing food. Domestic production normally accounts for only a quarter of total needs.

Libya’s industrial development is linked to oil and gas extraction, including three oil refineries. In addition, other petrochemical industries were also established. Steel mills and cement mills were also established. During the sanctions in the 1990s, a number of new industrial companies were started, primarily in Tripoli and Benghazi. The industry is dominated by food products.

The state of the industrial sector is variable as a result of the war and the security situation, and a number of enterprises have been destroyed or are producing with reduced capacity.

The road network is best developed in the coastal areas, with an 1170 kilometer long main road along the coast, towards the borders of Egypt and Tunisia, through Tripoli and Benghazi. There has been no railroad in Libya since the line between Benghazi and Barce was closed in 1954. Construction of links east to Egypt and west to Tunisia, as well as south of the country, has been planned. International airports can be found at Tripoli (Ben Gashir) and Benghazi (Benina). Tripoli is the largest port city. Other important port cities are Benghazi, as-Sider, Port Brega (Marsa al-Brega) and Misurata.

Oil exports have given Libya large profits in foreign trade, although revenues have fluctuated strongly with production volumes and market prices. Crude oil sales normally account for around 95 percent of foreign exchange revenues. The main trading partners are Italy, Germany and Spain. 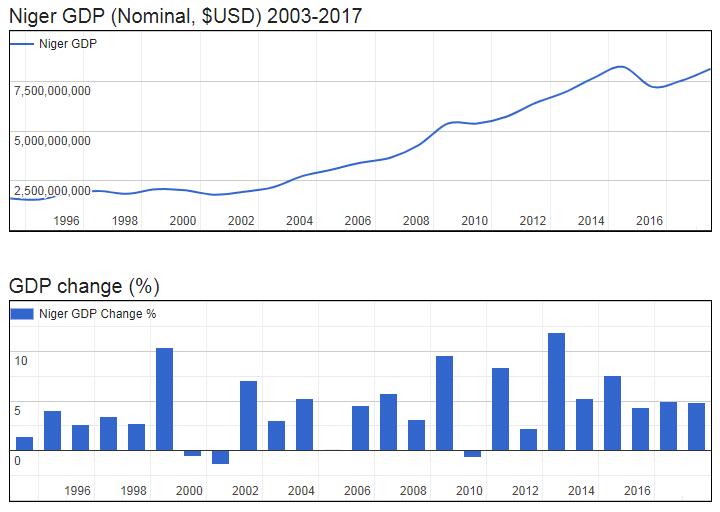