Abbreviated as MWI by abbreviationfinder.org, Malawi is a prominent agricultural country. Despite problems with a low level of education, few exploited mineral deposits, deficiencies in infrastructure and an import-dependent industrial sector, the country has since independence shown an unusually positive economic development for Africa. This is mainly due to a sharp increase in agricultural investment from both domestic and foreign sources during the 1970s and because the country was able to benefit from large aid-financed investments. 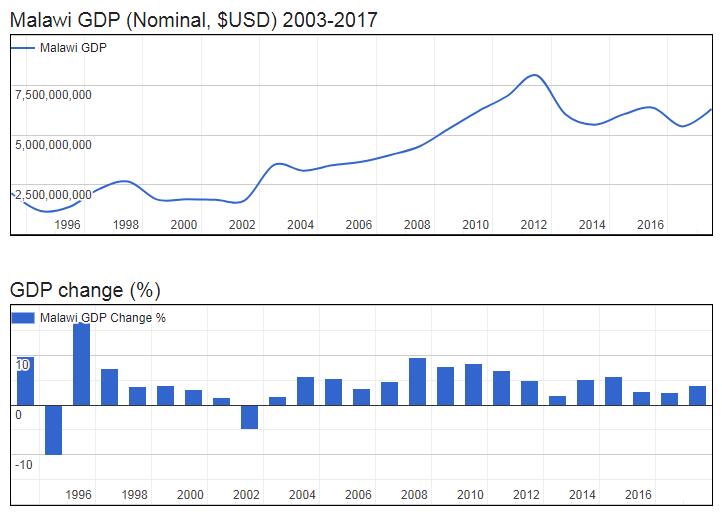 During the 1980s, the economy was characterized by large fluctuations as a result of dry periods and political unrest in southern Africa; inter alia the transport routes were closed down through Mozambique in 1984. Following pressure from the International Monetary Fund, Malawi therefore implemented an economic structural adjustment program during the latter part of the 1980s. The positive effects of this were destroyed by the severe dry periods of 1991-92 and 1993-95 and the withdrawal of non-humanitarian aid as a result of Malawi’s failure to respect human rights. During the 1990s, the World Bank and the International Monetary Fund continued to play an important role in the Malawian economy. The eradication of poverty is a central part of economic policy. The strong dependence on the outside world and on favorable agricultural conditions make Malawi’s economy vulnerable,

Agriculture is Malawi’s most important economic sector and accounts for about 90 percent of export revenue. About 85 percent of the economically active population is employed in agriculture. The sector is characterized mainly by small-scale self-sustaining agriculture. In recent years, the government has invested heavily in a program that includes subsidizing artificial fertilizers, which has led to increased harvests of mainly maize.

Plantations for industrial timber and pulpwood have been developed since the early 1970s. On the Viphya Plateau in northern Malawi, pine and eucalyptus plantations have been constructed for future paper and pulp production. The latter project also includes infrastructure development, including the construction of a port in Chinteche on Lake Malawi. An estimated 400,000 hectares of forest are harvested annually, of which about 90 percent is used for firewood.

Fishing plays an important role in food supply in Malawi, and the industry employs around 200,000 people. The catches go mostly to self-catering. Since 2001, Malawi, Mozambique and Tanzania, which all have coasts on Lake Malawi, have been working together to manage and conserve the lake’s resources.

Findings of bauxite, asbestos, coal, uranium, graphite and semi-precious stones exist but have not yet been exploited. Only limestone for cement production is extracted to any great extent. The most economically interesting deposit is that of the bauxite in the Mulanje area, which is estimated to amount to 29 million tonnes of high-grade ore. However, the costs of road construction and the expansion of the country’s hydroelectric power station have hindered exploitation.

Waterworks in the Shire River are responsible for almost all electricity production. The country also has privately owned diesel-powered generators, of which about 50 percent are controlled by major sugar plantations.

Of the country’s total energy consumption, however, water energy, oil products and coal account for only 10 percent; the remaining part is covered by firewood and charcoal. Nevertheless, oil products are the country’s most important imports. To reduce oil dependency, Malawi has been investing in ethanol production since 1982. In 2004, Malawi’s electricity grid was connected to the Cabora Bassa power station in Mozambique.

Malawi has a very limited industrial sector with a major focus on the processing of agricultural products as well as goods for domestic consumption. However, the industry is heavily dependent on imports with regard to raw materials, machinery and machine parts, which is why it is sensitive to the country’s access to foreign currency.

Malawi has tried to attract foreign investors by creating a favorable investment climate. However, the limited local market and limited export opportunities have meant that only a few companies have exploited the opportunities.

Agricultural products account for more than 90 percent of Malawi’s export revenue. The most important export crops are tobacco (about 50 percent), tea and sugar. Imports are dominated by oil products, fertilizers, manu- facturing and spare parts, pharmaceuticals and agricultural machinery and food.

Zimbabwe, Mozambique and Belgium are among Malawi’s most important export markets, while South Africa, China and India are the most important importing countries.