Abbreviated as MRT by abbreviationfinder.org, Mauritania is a desert country with few farming opportunities besides animal husbandry, which dominates the sector. Climatic conditions, with several periods of drought, as well as occasional large occurrences of grasshoppers, have caused considerable losses in agriculture in recent years. This in turn has led to a strong urbanization, where a lack of work has contributed to social distress; over half of the population lives below the poverty line. In addition, the country has a large fishing industry based on offshore fishing, as well as viable deposits of some minerals, especially iron ore.

Mauritania is large and gritty, with poorly developed infrastructure, and with a small modern sector. The country’s social and economic development has also suffered from a lack of political stability, as well as from the Western Sahara war in the second half of the 1970s. Oil extraction was expected to contribute significantly to the country’s revenues from the second half of the 2000s. 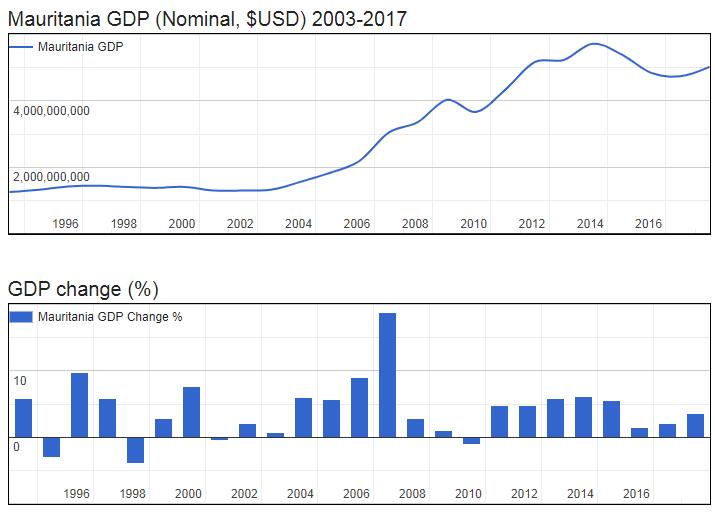 The mining industry has been crucial to Mauritania’s economy since the 1960s. In the 1960s, large deposits of iron ore and copper were found and extraction started. In 2000, mining accounted for approx. 11% of Mauritania’s GNP, and just over half of the country’s export revenue. Particularly in the Guelbs region are large iron ore clays (hematite), with reserves of an estimated 5000–6000 million tonnes. The deposits are exploited by the state-owned company Société nationale industrialelle et minére (SNIM), formed in 1974 after the nationalization of the French-dominated mining company MIFERMA. The ore is transported by rail to the shipping port at Nouadhibou. At Akjoujt, large reserves of copper and cobalt (extraction started in 1969) and gold have been identified.

In the early 2000s, exploration for valuable gold deposits was carried out. There are also instances of gypsum, phosphate, uranium, yttrium, ilmenite, tungsten and diamonds.

Exploration drilling for oil was started in 1989, and extraction in the Chinguetti field, offshore off Nouakchott, with reserves of up to 850 million barrels, was started in 2005-06. Significant occurrences have also been identified in other fields, including: up to 350 million barrels in the Tiof field further north, as well as large gas deposits. in the Banda field, east of Nouakchott.

Mauritania has very little industry, with the exception of oil refining, fish processing and the production of consumer goods. A smaller steel mill was opened in 1974, but has been closed for long periods. Many companies in the fishing industry also had to close down in the 1990s, due to high operating costs.

Mauritania is traditionally a farming community, with an emphasis on nomadic animal husbandry. Only approx. 1% of the area, by the Senegal River, has sufficient water – from rainfall or river – to be cultivated. From having employed approx. 90% of the working population in 1965, found only approx. half of agricultural employment in 2005. Drought disasters in the 1970s and 1980s, as well as several years where grasshoppers have destroyed crops, have significantly damaged the industry, and many livestock nomads have had to move into the cities. Agriculture in 2002 accounted for only approx. 20% of GDP; a halving in relation to independence, 1960. In the small area cultivated, i.e. rice and millet, in the oases also dates and wheat. In the far south, some peanuts (peanuts) and cotton are grown, and rubber arabic is extracted from acacia trees.

The fisheries are of great importance both as a food supplier and for monetization. From the 1990s, the sector has accounted for approx. half of the export revenue and a quarter of the state’s revenue. A large part of the fishing takes place from foreign trawlers, essentially from the EU, and partly from Eastern Europe, with a license. From 1983 all catches had to be taken ashore in Mauritania, creating jobs, value creation and export revenue; in the 1990s, this was eased somewhat after several fishing companies were closed down. Nouadhibou is the main fishing port with fishmeal and freeze industry. In the Senegal River, freshwater fish are fished, mostly for local consumption.

Mauritania normally has a trade deficit, and as a result of, among other things, drought and falling iron ore prices, Mauritania has become increasingly dependent on financial assistance from abroad, especially from France and the EU. Fish and iron ore each account for approx. 50% of the export value.

Mauritania’s transport network is poorly developed, also because the distances are large and the population base is thin. Apart from the ore track linking the ore fields with the port of Nouadhibou, domestic transport takes place on an inadequate road network or by air. The 1,100 km long transmauritan highway, which connects the capital of Nouakchott with the relatively densely populated southern parts of the country, was completed in 1985. The road is part of a road network through the Maghreb region. A new 470 km road connection between Nouakchott and Nouadhibou was completed in 2004. International airports are located at Nouadhibou, Néma and Nouakchott, as well as several domestic airports and airstrips. The main port cities are the Point-Central ore port, 10 km south of Nouadhibou (the largest fishing port), and Nouakchott. About. 210 km of Senegal River is navigable throughout the year, and there are three major port cities on the river; Rosso, Kaedi and Gouraye.