Throughout the 1980s, Peru was hit by a severe economic crisis. Falling prices on the world market for the country’s export goods, reduced fish catches and reduced agricultural yields contributed to economic instability and political turmoil. In the period 1985–95, the country had an annual, average, growth in the economy of 0.4%, however, population growth was much higher, and gross domestic product (GDP) calculated per domestic decline. To improve the financial situation, and To bring down huge inflation, extensive privatization of state-owned enterprises and substantial savings in the public sector were carried out. The result was a reduction in inflation from 7600% in 1990 to 10% in 1995, and a stimulus to foreign investment. In 1994, the country achieved a full 13% economic growth. For 2002, economic growth was 3.8%.

The tourism industry has a certain importance and is progressing after a few years where health and safety problems have led to a reduction in the number of visits. It is Lima with its Spanish colonial architecture, the incubator Machu Picchu, Lake Titicaca and the Amazon which are the main tourist destinations. In 2004, the number of foreign tourists increased by 11% and amounted to approx. 2.4 million people. Service-providing industries accounted for approx. 53% of GDP.

Agriculture (including forestry and fishing) employed approx. 1/3 of the work force, and contributed about 13% of the country’s gross domestic product. Only approx. 3% of the total area is cultivated, but there are great cultivation opportunities, especially in the east. Most of the export production takes place in the coastal zone, where the rivers are used as a source of irrigation. Cotton and sugar are grown as monocultures on large plantations. In addition, rice, maize, fruits and vegetables are grown. In the highlands, agriculture is more extensive, with large pastures and livestock of cattle, sheep, llama and alpaca. The crops here are corn, wheat, potatoes and vegetables. In the years 1969–76, the large land properties in the highlands were partially converted into cooperatives and smaller uses. Coffee, tea and coca leaves are grown on the eastern slopes. Cookies, which include can be transformed into cocaine, constituting an increasingly important source of income for the population of the inland area.

More than half of the country is wooded, but most of the forest is in the Amazon area, as a result of. transport difficulties and inaccessibility are of little use for commercial operations. The only shipping option is via the Amazon and the Atlantic. In the highlands, however, the conditions are more suitable. rubber and mahogany trees. Most of the logging is used on the domestic market for fuel, furniture and as building material and wood pulp.

Peru had the largest catch in the world in 1969 (9,223,500 tonnes), but overfishing and unfavorable current conditions almost led to a breakdown in fishing in the early 1970s. Catches were low, but relatively stable throughout the 1980s, and then increased again. In 1994 over 11 million tonnes of fish were fished, but after that time fishing has declined somewhat. Most of the catches are the anchovy fish anchoveta, which is used for herring oil and herring flour, the rest are essentially sardines and mackerel species. The fishing industry was nationalized in 1973, but partially privatized in 1976, and ended up largely to foreign hands.

Abbreviated as PER by abbreviationfinder.org, Peru has been known as a mineral-rich area ever since the colonial era, and it is one of the world’s largest exporters of a number of minerals, including copper, zinc, silver, lead, tin and iron. Bergverk employed 1.5% of the working population (2002) and contributed approx. 3% of GDP. It is expected that the industry, which is dominated by a few large companies, will increase in size as foreign investors become more established.

Most of the mines are located in the Andes Mountains (between 3000-5000 meters). Here iron, copper, lead, zinc, silver, antimony, molybdenum, etc. are produced. Important mining towns are Cerro de Pasco in the central Andes, Cuajone and Toquepala in the southern mountain areas and Marcona near the coast in the south.

Peru has long been producing oil in the northern coastal areas, near the border with Ecuador, and natural gas is being extracted in the east. New petroleum fields were later found. Natural gas is transported by pipeline across the Andes to the coast.

Peru’s industry is largely based on processing of the country’s natural resources, and employs approx. 10% of the country’s workforce and contributed 24% of GDP in 2002. Almost all industrial production is concentrated in the Lima-Callao area, which includes has large motor vehicle assembly plants and a versatile consumer goods industry. Several of the largest companies in the country process minerals, among others. copper, lead and zinc smelters, and Chimbote in the north has an important iron and steel plant. In addition, there are petrochemicals, foodstuffs and textiles. Several herring flour mills are concentrated along the central coastal zone north and south of Lima.

Peru, especially since 1991, has had a deficit in the trade and balance of payments abroad. In 2002, the deficit was 2%. The main export goods are copper (18%), zinc, silver and fishmeal. Agriculture’s most important export goods are coffee and cotton. Imports consisted, among other things, of of machinery and transport equipment, food and chemicals. Peru is considered the world’s largest exporter of cocaine (processed into cocaine). The scope is somewhat uncertain, but it is estimated to have greater value than total legal exports. The United States is the largest recipient of the cook.

The most important road traffic corps is the Pan-American Highway (2954 km in Peru), which runs along the coast from north to south and has cross connections with inland. In addition, there are two main railways, one in the south and one in the central parts of the country. Both go from the coast to the inland over the Andes. Especially the central train, which runs from Lima, is widely used for ore transport. The course is also the highest in the world, crossing the Andes at an altitude of 4817 meters. The Mollendo-Cuzco railway in the south is connected to the railway network in Bolivia via boat routes on Lake Titicaca.

The domestic routes are well developed, and Lima-Callao has an international airport. Callao is the main port city, while Talara in the north has large petroleum exports, San Nicolás is the iron ore port and Mollendo – Matarani in the southern copper port and the port city of Bolivia. Peru has a smaller coastal shipping fleet and some domestic traffic on the Amazon, where Iquitos is the river port. 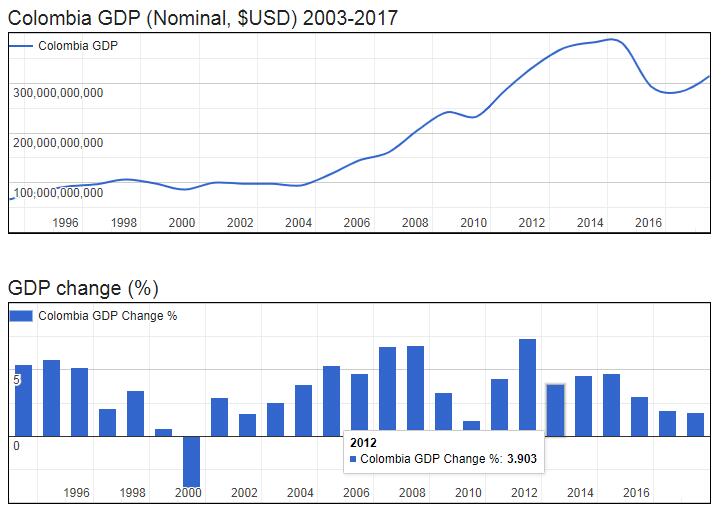