Abbreviated as ZAF by abbreviationfinder.org, South Africa, along with Nigeria and Egypt, has Africa’s largest economy and is the most industrialized country on the continent. South Africa has a well-developed and modern infrastructure and houses Africa’s largest banking and financial institutions.

The historic cornerstone of the economy is a mining industry built on the country’s exceptionally rich mineral resources and a modern agricultural sector. Large state companies in areas such as transport, energy and industry have been instruments of economic development. South Africa also has a large private and public service sector.

However, the legacy of apartheid is also strongly present. South Africa’s modern economy also has a face dominated by mass unemployment, persistent poverty and increasing inequality. 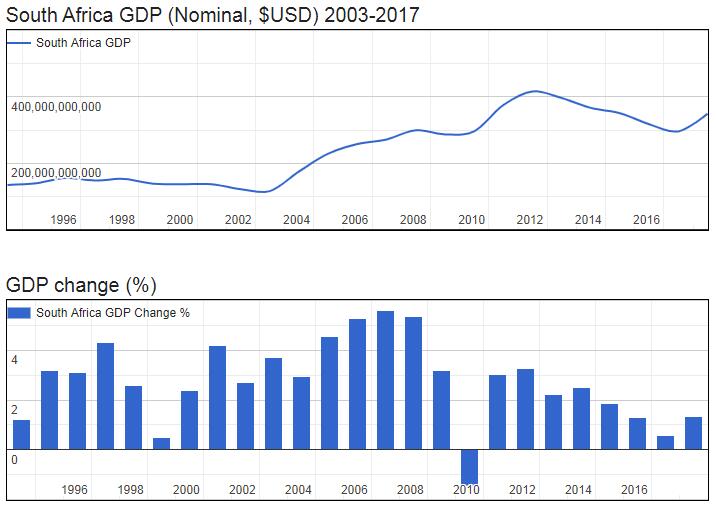 Following the first democratic elections in 1994, South African authorities launched a comprehensive and ambitious program to overcome the legacy of apartheid. This includes a new economic policy of redistributing wealth, large investments in infrastructure to improve living conditions for the black population and incentives for black business. At the same time, South Africa’s new role internationally led to growth in exports and new investments from abroad. This contributed to strong growth in parts of the South African economy. Among other things, there was great growth in the construction sector, in the public service sector, an emerging strong black middle class and to many large companies and locomotives in the South African economy were given new growth opportunities on the African continent. South Africa also experienced significant economic growth for the first 15 years, but after the global financial crisis in 2008, growth has slowed and leveled. South Africa is the only country in Africa – next to Botswana, Gabon and Mauritius – that belongs to the upper middle income group.

In important areas, however, economic policy did not have the intended effect. South Africa is still among the countries in the world with the greatest inequality in the distribution of wealth and income while half the population lives in poverty. South Africa has made great strides in getting people out of extreme poverty. The development of social security schemes that now reach 17 million South Africans, compared to two million in the late 1990s, has become an important safety net for the poorest. Investments in infrastructure – access to clean water, electricity and massive social housing – have also made living conditions better for many. A sharp rise in life expectancy from the mid-2000s also indicates significant progress in important areas. However, half of the population – mainly black Africans – still lives below the poverty line. Inequality between poor blacks and a growing black middle class has also increased dramatically.

A major cause of poverty and inequality has been the high unemployment rate, which has increased despite economic growth. Since the 2008 financial crisis, unemployment has been between 25 and 30 percent and almost 40 percent for youth between the ages of 15 and 34. During Jacob Zuma’s presidential term until 2018, the financial problems were exacerbated by increasing corruption, especially through public procurement and mismanagement of large state companies.

Another major problem for economic growth stems from low-skilled labor. The education system has been greatly expanded after the fall of apartheid, but the quality of education is still low. This has resulted in a large shortage of highly educated and skilled labor.

Agriculture is important for South Africa’s economy and export revenues, although the sector plays a smaller role today than before. Among the important export products are fruits and vegetables, wine, sugar and tobacco, as well as meat and grain products. South African agriculture is vulnerable to climate change. Only about 13 percent of the land area is suitable for growing crops, the larger area for animal husbandry. Lack of regular access to water is an obstacle and has contributed to regular and increasing periods of drought.

Commercial agriculture is dominated by 30,000-40,000 farmers, almost all of whom are white. These employ half a million land workers in permanent positions and just as many seasonal workers. Most of the production for markets and all exports takes place from here. Around one million households are housed in smallholdings in the former reserves of blacks (bantustans).

The government’s goal was for 30 percent of the commercial land to be transferred to blacks through a comprehensive land reform program. After 20 years, about eight percent were transferred. Of this, it is estimated that around half were successful by giving the target groups improved living conditions. Lack of effective support schemes and agricultural guidance has been an important explanation for insufficient results. This has led to demands for more radical measures and that the authorities are now in favor of a change in the constitution which should make expropriation of land easier.

South Africa has a long coastline and rich fish stocks. Commercial fishing is concentrated along the Atlantic coast and along the southern coastal strip of Western Cape Province. Along the east coast towards the Indian Ocean there are a number of smaller coastal communities where fishing is important for self-storage. Along this coast there is also extensive leisure fishing.

South Africa is extremely rich in minerals. Historically, gold and diamonds predominated, but eventually a large number of products have been added. South Africa is the world’s largest producer of platinum, chromium and manganese. Also extraction of iron ore is extensive. Although the industry has taken over the position as the most economically important productive sector, mineral exports still hold great significance and account for 60 per cent of the country’s export revenue.

The mines are also a significant employer, traditionally also for migrant workers from neighboring countries.

South Africa also has large coal deposits and among the world’s largest coal exporters. However, 3/4 of the coal extraction goes to domestic consumption and power generation.

South Africa has a well-developed and modern physical infrastructure. This includes road networks, railways, ports and airports. Passenger transport is characterized by large use of private cars for the middle class and wealthy, while public transport is too poor for many who cannot afford their own car. The use of private minibus taxis is important to bring people between work and residence.

Power generation is also great. After a major expansion following the fall of apartheid, nearly 90 percent of the population now has access to electric power. Almost all the power generation in the country comes from coal. This has led South Africa to become the world’s 14th largest source of greenhouse gas emissions in 2019.

The other major energy source is a nuclear power plant north of Cape Town. Former President Jacob Zuma signed a letter of intent with Russia to build several nuclear power plants, but this has since been put on ice. Instead, there is extensive investment in renewable energy sources, especially solar and wind power. However, power generation has not kept pace with demand. This has at times led to a lack of power. Rolling shutdown of the mains has become a necessary measure to prevent a crisis.

The power company Eskom is South Africa’s largest state-owned company and among the world’s largest of its kind. In an effort to streamline power production, in 2019 South African authorities decided to divide the company into three, based on the divisions for production, transmission and distribution.

Smaller deposits of oil and larger reserves of natural gas are found in the sea southwest of Western Cape Province. Larger discoveries were made in 2019 that could lead to later recovery.

Telecommunications are well developed, especially through mobile networks and general access to mobile phones. Many, especially in the countryside, still have little and poor access to the internet.

South Africa is the most industrialized country in sub- Saharan Africa, with a broadly composed industrial base. The industrial sector is dominated by food production and brewery, based on the processing of agricultural products, the steel and metal industries, the chemical industry, textiles and footwear and not least a large automotive industry. Several of the world’s leading car manufacturers have added production to South Africa. This has also given rise to a large local production of components for the automotive industry. Cars are also an important export product.

The industrial sector is growing, but its contribution to GDP is declining. Some sectors are struggling, especially in textiles where competition from cheap imports from Asia is high. Particularly dramatic is the fact that the industry is unable to increase employment.

Today, South Africa’s service sector is the largest in terms of both employment and contribution to gross domestic product. This includes the banking and finance sector, retail trade, tourism and telecommunications services. Public service has also grown sharply.

Travel and tourism have shown strong growth. Now the industry directly employs around 750,000 people and contributes to almost 3 percent of the gross domestic product. Over 10 million foreigners visited South Africa in 2018 – only Morocco had more foreign tourists in Africa. Most of the foreign tourists came (75 percent) from other African countries, especially neighboring states. Overseas tourists come mainly from the UK and other European countries, from the US and from India and China. Nevertheless, the greatest contribution to employment and the economy comes from strong growth in domestic tourism. Here, a growing black middle class has made a strong contribution.

The informal sector is a small sector measured in terms of contribution to gross domestic product, but it employs a significant portion of the labor force – perhaps as much as a third of all non-agricultural labor. The majority are employed on informal contracts in small businesses and households.

South Africa has an open economy and has seen strong growth in its foreign trade and investment from abroad since the fall of apartheid. Exports are dominated by raw materials and products from primary industries and mines, while imports are dominated by various finished goods. The partial exception is trade with the rest of Africa where exports of industrial products are important.

South Africa has gained ever closer economic ties to the rest of Africa, and South African companies are also major investors in many African countries. This is especially true of the mining sector, but also banking and finance, retail trade, tourism and the brewery industry. South Africa is in customs union with neighboring cities of Botswana, Lesotho, Namibia and Swaziland.