Abbreviated as TUN by abbreviationfinder.org, Tunisia has a mixed economy with both public and private companies. Business is based on oil and phosphate extraction, textile industry and tourism. In 2009, 18 per cent of the labor force was employed in agriculture, 35 per cent in industry and 47 percent in the service sector. Despite investments in labor-intensive production and despite the fact that about 13 percent of the labor force works abroad, underemployment is high.

During the 1990s, the country implemented sweeping economic reforms; inter alia state companies were privatized and large sums were invested in education and development projects. This modernization has had a positive effect, and the country has had a stable economic growth during the 1990s. 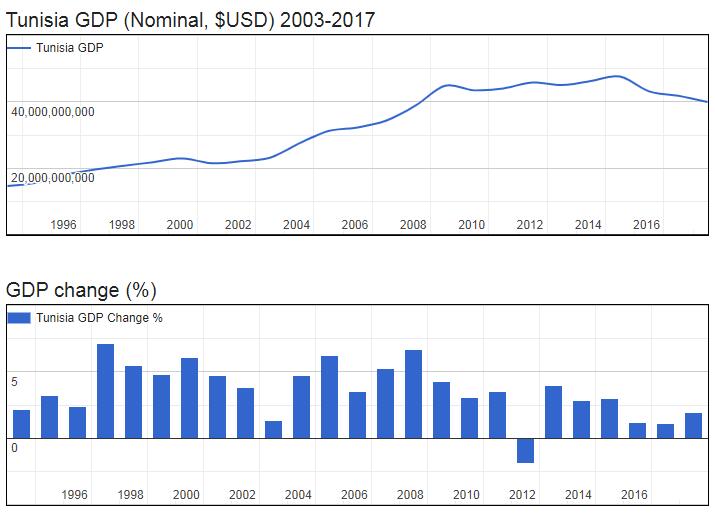 About half the country’s area can be used for agriculture, mainly as pasture. The most fertile areas are in the north, while scattered oasis farms are in the rain-poor south. Since the 1980s, major efforts have been made to modernize and expand the artificial irrigated area.

During the 1960s, a comprehensive program of agricultural reforms was initiated. The basis of this was collective farming (at least 500 ha) with merged small farms and land expropriated from French colonialists and large property owners. However, collectivization failed, and since the 1970s the role of the private sector in agriculture has increased. Today, agriculture consists of small farms using traditional farming methods and large modern, mechanized farming units.

The most important crops are wheat, barley, olives, fruits and vegetables; olives and fruits are exported. Tunisia’s agriculture is hampered by uneven rainfall and fluctuating harvests; the country is not self-sufficient with food even during good years.

With the 1,300 km long coastline, Tunisia’s fishing conditions are favorable. Mainly landed sardines and tuna. Major efforts are being made to expand the fishery. Catches increased sharply over a period, but during the late 1990s and early 00s they declined again as a result of overfishing. However, catches have recently increased again, mainly thanks to a modernization of the fishing fleet.

Phosphate, oil and natural gas have long been of great importance to Tunisia’s economy. However, during the 1990s, the economy has expanded and the dominant position of these commodities has decreased. In addition, smaller amounts of iron, lead and zinc are mined. Tunisia is the world’s fourth largest producer of phosphate, which is mined in the western parts of the country and is mainly processed for the production of chemicals and fertilizers for export.

The import substitution policy introduced in the 1960s was unsuccessful as capital-intensive production dominated and the domestic market was limited. Since the 1970s, they have instead focused on labor-intensive and export-oriented production, where the textile and clothing industry has a prominent role. The food industry is also significant. Other activities include the production of building materials and the mechanical, electromechanical and chemical industries. More than half of Tunisia’s industry is concentrated in Tunis. Other industrial species are Sousse, Sfax, Gabès and Banzart on the coast as well as Qafsa and Kasserine in western, central Tunisia.

Tunisia’s large-scale tourism started in the 1960s and 1970s with the development of bathing tourism. Tunisia was visited in 2012 by 6 million visitors, which was a decline from previous years. The reason for the decline was the country’s political unrest in 2010-11. It is mainly tourists from neighboring countries and Europe who visit the country.

Most of the tourists have the coastal zone at Hammamat Bay south to al-Mahdiya. Cities such as Hammamat, Sousse, al-Munastir and al-Mahdiya, as well as the farther south of Sfax, have old town centers with narrow streets, exciting bazaar blocks, worthy mosques (in Sousse and al-Munastir in the form of a kind of fortified monastery from the Middle Ages). and interesting museums with high-class objects from mainly Roman times (especially mosaics).

To see the well-preserved Roman ruins you have to go inland. In El-Djem (see Thysdrus) there is an amphitheater that is smaller but better preserved than the Colosseum in Rome. One of the international destinations of Islamic culture is the great mosque in Kairouan, the oldest of which dates back to the 600s; the city is also a center for making carpets. In Nabul, not far from Hammamat, ceramics are made in the form of vessels and tiles, mainly in blue and white. But it is in Tunismedina, the old town center, where you will find the largest bazaar for fabrics and clothing, jewelry, spices, carpets, shoes, leather work and much more. There are also interesting and partly very old mosques and tombs, Koran schools, palaces and small traditional cafes. On the outskirts of the city is the famous Bardom Museum, housed in the ancient Beirut palace, with famous collections from Roman and Muslim eras (including beautiful wall tiles), but also interesting objects from the Punic period. If you want to see more of the Punic culture, you should visit Carthage just north of Tunis, with the excavated city hill, the harbor and the Baal Temple.

The regions west and southwest of Tunis exhibit a stately landscape with dark mountains and greenery on plains and ravines. Here are hot springs, which have been exploited since Roman times, further afield towards the Algerian border large forests of cork oak, inhabited by wild boars. In the south, the Sahara begins, with higher daytime temperatures and intensely lush oases, some of which, such as Nafta and Tawzar, are larger resorts with excellent hotels. The journey on the road bank across the salt lake Shatt al-Jarid, which sometimes looks like a large shallow sea, sometimes like a white sparkling ice crust in the heat, is a strange experience. From the large oasis at Gabès, the only seaside in North Africa, with 300,000 date palms, you can continue on to the holiday island of Jarba, whose soft cultivation landscape, massive building condition and interesting handicraft products are different from the rest of Tunisia.

Tunisia’s rich gastronomic offer has white-branched roots, where Bedouins, Phoenicians, Romans, Turks, Jews and Frenchmen have all left their mark. A refined flavoring of the usual simple ingredients is common, although in general it can be said that in Tunisia a stronger spice is preferred. So, for example, the couscous found throughout Tunisia in Tunisia is heavily harissed. It is cooked in vegetarian form, almost always with chickpeas, or with lamb or fish.

The meal is often started with soup, bride, cooked on beans, lentils or chickpeas with lamb, fish or chicken. The Tajine stew is cooked in Tunisia with rabbit or lamb and plum, flavored with fennel and lemon. Marinated vegetables served with pancakes (brisket) stuffed with minced meat, cheese and eggs are a popular dish, as are chakchouka, tomatoes with eggs and bell peppers. Fish (sardines, mullus, tuna) are grilled or marinated with lemon fruits or olives.

Pastries with millimeter-thin puff pastry, filled with nuts, honey and almonds, as well as honey or syrup marinated dates and other fruits are eaten with delight.

The most important Tunisian vineyards are located on the hillsides in a crescent around the capital Tunis; it also produces an excellent nutmeg at Qulaybiya on Cape Bon Peninsula. Much of the production consists of table wines, and the quality can be uneven. A common drink for both the strong food and the sweet desserts is mint. Boukha is a kind of fig brandy that is suitable for rounding off a real meal.